I found the instructions very straight forward. Easy to put together. My fur child is 3 and has not shown any interest to date in her new tree. I am sorry I did not start with one of your products when she was a kitten.

Ninja is loving it! She’s even sleeping there overnight! 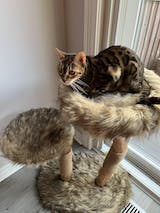 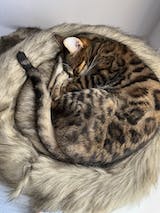 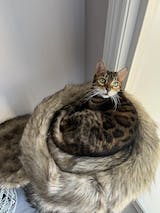 I love this one, it’s bigger than expected. It did take twice as long as expected to arrive though 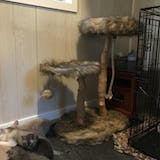 I really like that this perch isn't tacky like most cat furniture out there. I was however quite disappointed with the colour of the wood. I fully understood when I ordered this item that there would be a variance in the wood colour. What I didn't expect was that the wood would be a peachy colour! I chose this perch because of the natural, rustic look but there is nothing natural about peachy wood. I paid a lot so I'm kind of disappointed. My cats don't seem to care though :)

Also it's not as soft and cushiony as it looks online, especially the lower perch. 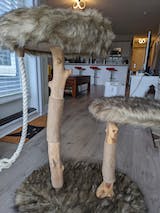 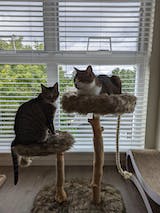 This post came super quick and is as advertised. The fluffy part doesn’t feel like I had hoped texture wise, it’s not quite as nice of a texture as it looks in the photos. I would rather pay a bit more in the future for a nicer quality texture like you would find on a real cushion for human use. Perhaps the company could offer a deluxe upgrade option in future? Looks much better than any other cat post I have ever had though. Easy assembly, feels pretty sturdy. Main, highest cushion is a little bit wobbly and won’t thread fully, but hopefully it stays put. For the price, value, and compared to what else is out there, I had to give 5 stars even though there are some little improvements they could make for sure. Overall pretty satisfied. 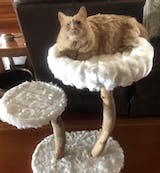